As we know that one chakra tends to affect the other chakra , this is true also for the direction in which the chakra is spinning. It is sometimes understood that based on the gender or activities done on daily basis as either masculine or feminine in nature.The Chakra movements in a man may be different from that of a woman. This is also one of the reason of the magnetic pull between man and woman. Sometimes it is not necessary that the male and female spins are different in a couple, can be similar in nature and can produce twice as much energy, if both the male and female have negative or opposite chakra spin it can lead to replusion, eg: lower solar plexus chakra or man and egoistic or overtly competitive woman can be source of potential due to low chakra spin in one and increased energy/spin in other.
Typically the males are masculine and that is the reason why it moves in clockwise direction, whereas females are more emotional heart chakra is in clockwise direction

Chakras are centers of overall consciousness, perceptions, emotions, thoughts and ideas. Also the way how we are emotions and thoughts are our chakra movement will change accordingly. The moment we start doing things which are different w.r.t to the core element or nature of the chakra the spin direction changes

Typically the Mooladhara /Root Chakra and Crown Chakra will be horizontal in some way and rest of the chakras from Ajna to Hara Chakra will be vertical in nature. However for different people the chakras will be spinning differently either oblique, circle, oval , conical sometimes like wave or line. Ideally root and hara chakras have the slowest speed, from manipura on-wards the spin increases and the spin is highest is the brow or 3rd eye chakra.

Considering the above points below is the chart which gives an insight into the Chakra spin and movement :-


Based on the above chart we can see that person who is ruled or focussed on elements of Hara ---Heart---3rd eye combination has more feminine qualities or has more elements of it in one's person. Hence women are more Yin  oriented. Similarly more focus on Root---Manipura---Throat chakra results in masculine qualities. Hope the chart helps in better understanding of chakra spins. 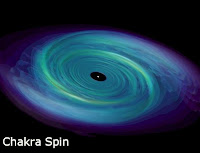